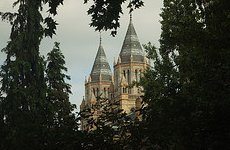 THE WORLD’S oldest dinosaur has been discovered lurking in the drawers of a cupboard in a back room of the Natural History Museum.

Fossilised bones belonging to the Labrador-sized Nyasasaurus parringtoni have been kept at the museum for half a century, but it was only when they were re-examined recently that an accurate age was arrived at and that turned out to be 245 million years old.

The previous record for oldest dinosaur fossils was about 228 million years old.

The extra 17 million years is significant for palaeontologists as it sites Nyasasaurus parringtoni in the Middle rather than Late Triassic period.

“It fills a gap between what we previously knew to be the oldest dinosaurs and their other closest relatives,” said Dr Paul Barrett, a dinosaur expert at the Natural History Museum.

“There was this big gap in the fossil record where dinosaurs should’ve been present and this fossil neatly fills that gap.

“We push the origin of dinosaurs further back to a time when lots of reptile groups are evolving.”

The fossils were first discovered in the 1930s by Rex Parrington near Lake Nyasa – hence the creature’s name – and donated to the museum twenty years later.

Dr Barret is to give a talk about the first dinosaurs, including the one that was hiding in the store-room, this Saturday, 8 December at the Natural History Museum.

BA Christmas Strikes set to be Called Off Next Week