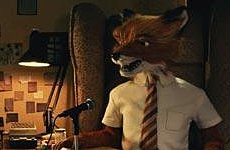 “I know that when I started the project, I wanted to make a movie like the children’s films I loved as a child,” Anderson told The Times.

“There’s a charm to stop-motion that’s personal to me. You get to make literally everything from scratch, so you can create an entire world. I love the handmade aspect of it.”

That hands-on feel is probably not how some of the crew feel about the production process as Anderson emailed many of his instructions from his flat in Paris to the Three Mills studio here in London.

“He has made our lives miserable,” said Mark Gustafson, director of animation on Fantastic Mr Fox.

On the other hand, behind the scenes rows can often iron out artistic difficulties and that appears to be the case here, because Anderson has certainly delivered as far goes this film, an adaptation of a famous Roald Dahl children’s story.

“The movie would not be the way I wanted it if I just did it the way people were accustomed to doing it,” said Anderson.

“I realized this is an opportunity to do something nobody’s ever seen before. I want to see it. I don’t want afterward to say, ‘I could have gone further with this.'”

For more on the London Film Festival go here