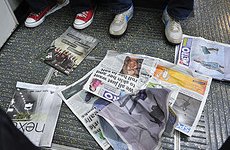 LONDON UNDERGROUND cleaners began a 48-hour strike today over lack of Olympic bonuses, fielding picket lines outside many stations including at Stratford, close to the Olympic Park.

While plenty of other public transport workers, from Tube drivers and DLR captains to bike hire operatives, have netted bonuses of up to £1,000 for the extra workload during the 2012 games, cleaners have been left out.

“With the eyes of the world on the London Olympics, the many millions enjoying the events around the globe must not forget the London transport cleaners doing some of the dirtiest jobs in often appalling conditions with no Olympics recognition and reward whatsoever,” said Bob Crow, leader of the RMT union which represents most Tube cleaners.

Tube cleaners are on a roll at the moment; unionisation and strike action having secured substantial hikes in hourly pay, which finally reached the London Living Wage of £7.60 following a long campaign and industrial action last month. Previously, many cleaners on the Underground earned just over £6 an hour.

Though the cleaners’ strike will have a cumulative impact on hygiene at stations, London Underground says trains will not be affected.

“We anticipate no impact on London Underground services as a result of this industrial action,” said LU’s Phil Hufton.