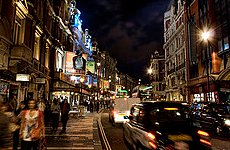 LONDON’S theatres saw ticket sales rise for the ninth year in a row in 2012, according to new figures released today by the Society of London Theatres (SOLT).

Total ticket sales for the 52 theatres in London under the SOLT umbrella reached £529,787,692 last year, a slender 0.27% increase on 2011, but one that was posted against the backdrop of the London Olympics and the continuing economic slump.

“I am delighted that for the ninth year running we are able to report year-on-year growth in ticket income for London Theatres,” said Mark Rubinstein, President of SOLT.

“It is particularly astonishing that we are able to report increasing sales – of over half a billion pounds – for a year that we always knew would have exceptional challenges.”

Many shows were cancelled during the Olympic summer causing sales and attendances at theatres to fall, but the 2012 Games deficit was more than cancelled out by a strong first half of the year and late autumn.

Among the new musicals to pull in the punters were Top Hat and The Bodyguard, while Twelfth Night starring Stephen Fry helped lift play attendances by 9% year-on-year.

“Against the background of a tough economic climate, London theatre continues to buck the trend,” added Rubinstein.

“With the combined box office advance sales breaking new records we are looking forward to another year of success stories for our theatres.”