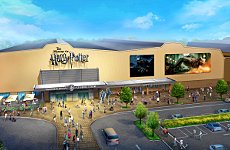 HARRY POTTER fans will get to visit the sets and studio where the famous boy-wizard film series was made, starting from 31 March, it was announced today, 06.10.11.

“It was such a magical place to grow up,” says Daniel Radcliffe, who played Potter in all eight films.

“People will be amazed to see the incredible sets that we’ve worked in all these years.”

“Warner Bros. Studio Tour London – The Making of Harry Potter”, as the attraction is to be called, is located at the Warner Bros. studios in Leavesden, near Watford, which recently underwent a £100 million refit.

A large chunk of that money has gone on the Harry Potter attraction, which could be the first of many at the studio as it was also the base for other recent blockbusters such as The Dark Knight, Inception and Sherlock Holmes: A Game of Shadows.

Among the sets on show will be: the Hogwarts Great Hall; Dumbledore’s office; the Ministry of Magic; Harry Potter’s cupboard under the stairs at 4 Privet Drive; 4 Privet Drive itself; the Gryffindor common room; the boys’ dormitory, the Hogwarts bridge and plenty of others still to be announced

“The sets all have tiny little details that you may not always notice in the films, but when you actually walk through them, you can see all the work that’s gone into it,” said Rupert Grint, who played Ron Weasley.

Tickets for The Making of Harry Potter go on sale on 13 October and will be available on LondonNet. They are to be priced at £28 for adults, £21 for children and £83 for a family of four.

Tom Cruise to Ride Designer Chopper while Filming in London