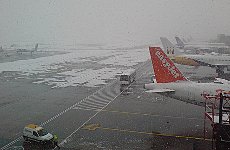 AIR TRAVELLERS about to crack open the champagne over the lack of a strike at British Airways might want to pause before taking a sip, as the weather does its best to support fed-up BA cabin crews.

Nearly 100 flights have already been cancelled at Heathrow and snowfalls across the south east of England also caused delays at Gatwick and Luton airports, though Stansted remained largely unaffected.

More snow is forecast for today, but the four main London airports say they have plans in place to keep disruptions to a minimum.

Some train services into London were suspended in the early rush hour, though things have settled down since.

“All lines are open but passengers should allow more time for their journeys,” said a spokesperson for National Rail.

That advice serves well for travellers by car, too.

The picture is mixed on the roads, with most areas fairly clear by midday (Friday), but a combination of the Friday holiday traffic and icy conditions suggest a tough time for those hoping or a quick getaway.

Dickens and Disney Light the Way to Christmas