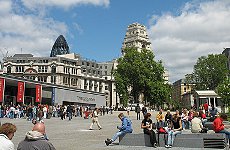 A SCHEME to build a six star hotel near the Tower of London that stalled during the bank crisis is now back on track.

London’s first six star establishment, the hotel would go up 10 Trinity Square, the old HQ of the Port of London Authority and host of the first General Assembly of the United Nations in 1946.

The hotel would keep the facade of the old building and would include exclusive flats as well as hotel rooms.

The news that the project – first planned in 2006 – has been revived will be seen as another vote of confidence in London’s economy, at least the high finance end. Earlier this month, we reported that City salaries and bonuses are seeing huge rises.

Only last year the future of the hotel was in serious doubt.

“Banks have turned the light out and no bank in the world will finance this. Right now banks in the UK will finance UKP20m projects but this is a UKP300m-UKP400m project,” said Kevin Case of developers Thomas Enterprises, in 2009.

Thomas Enterprises have now roped in Singapore-based hotel firm KOP Group to help fund the deal and, with planning permission already in the bag, building work could start next year.

Thames Festival to Light Up London