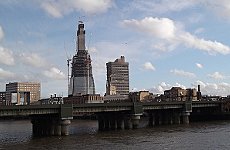 LONDON’S new tallest building, the Shard of Glass, near London Bridge, has been topped out, cementing its position above Canary Wharf’s One Canada Square in the capital’s skyscraper pecking order.

Topping out refers to when a building is finished, or when the last significant structural piece of its jigsaw is put in place. In the case of the Shard, the topping out ceremony was performed when the central core was completed.

With that core topped out, the Shard now stands proud at around 245m tall, five metres higher than One Canada Square, the official name for the Docklands landmark that most of us call simply ‘Canary Wharf’.

But that’s not the end of it for the knife-shaped Shard, as it still has 65m to go before it has finished its skyward ascent. By that time, it will not only be the tallest structure in London, but the tallest in Europe, too, pipping three Moscow giants to the winner’s post.

“Once complete, this huge engineering feat will be the tallest building in Europe, and is destined to become as iconic a landmark on London’s cherished skyline as the Gherkin, St Paul’s or Big Ben,” said London Mayor Boris Johnson.

More:
The View from the Shard Tickets