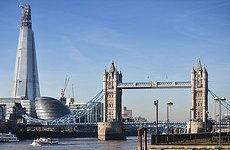 BRADLEY GARRETT, one of the men who scaled the Shard of Glass on the weekend, has vowed to find more London buildings to climb and plans to hold a dinner party when he reaches the top of his next target.

“We are working on a couple of projects in London and a couple more across Europe, linking up with urban exploring groups in different cities,” said Garrett.

“One thought that we are quite interested in is the idea of holding dinner parties on rooftops or tea parties in unusual places.”

Garrett and the London Consolidation Crew have already been up on top of Battersea power station, St Paul’s Cathedral and an assortment of disused London Underground stations, so you can probably write those off as the next targets.

Also already ticked off by urban explorers is the Olympic Stadium, which might come as some relief to 2012 Games organisers worried about security breaches in light of the swimmer who halted the Oxford v. Cambridge boat race.

“We are comfortable with the security measures being put in place,” said Darryl Seibel of the British Olympic Assoaciation.

“For any major event, it is impossible to provide an absolute guarantee or assurance with respect to security.”

More:
The View from the Shard Tickets

Tate Modern Turns 10 with Children of the World Message