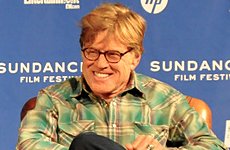 ROBERT REDFORD will be at the O2 for the launch of the first Sundance London film and music festival next April, it has been announced.

The legendary actor will have at his side Oscar-winning film music guru T Bone Burnett and author Nick Hornby as the festival sets out its stall as a joint film and music event.

“Having Robert Redford and T Bone Burnett with Nick Hornby open Sundance London is a real coup for the event,” said Alex Hill of AEG, which sponsors Sundance London.

“Between them, Robert and T Bone have a wealth of experience and knowledge of contemporary American film and music that few could rival.”

Started in 1978 as a showcase for independent movie making, Sundance has since become one of the major dates on the calendar for film watchers as first its themes were picked up by the mainstream later the films themselves hit the big time.

Redford sees Sundance London as both a highlights package of its Utah parent – the “very best in current American independent cinema” as he puts it – and an antidote to the view of the USA portrayed in Hollywood blockbusters.

“It is our goal to help build a picture of our country that is broadly reflective of the diversity of voices not always seen in our cultural exports,” said Redford.

“We want to bring a slice of our culture to this space,” he said.

Lily Allen Confirms Break from Songwriting and ‘the World’

Madonna is the Cash Queen of Pop