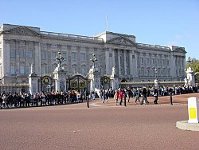 The annual summer opening of the Queen’s Gallery and State Rooms at Buckingham Palace has begun.

This year there is a musical theme with command performances to costume balls, and musical entertainment. Historic fancy-dress costumes, musical instruments and manuscripts, photographs and souvenirs will be shown in the magnificent surroundings of the Ball Supper Room, which itself has been the setting for many glittering events in the Palace’s history.

Visitors can also choose to see the Royal Mews alongside the State Rooms and Queen’s Gallery tour.

Book tickets for the Summer Opening of the State Rooms