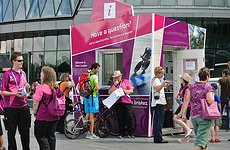 LONDON OLYMPICS volunteers – the people dressed in purple who helped visitors during the 2012 Games – are to become a regular feature of the city’s life, Boris Johnson announced today.

The London Mayor said the 8,000 Team London Ambassadors had been “one of the undoubted highlights of the summer” and that the Ambassador concept would be revived, starting at the National Football League fan rally tomorrow (27.10.12) in the run-up to the American football game between the New England Patriots and the St Louis Rams at Wembley.

In the future, London Ambassadors won’t be limited to big sports events, but will be drafted in to help travellers through airports, major stations and other busy tourist spots.

One of the first places to get an infusion of Ambassador love is the Eurostar terminal at St Pancras station, which has been allocated a 55-strong squad until 11 November as part of a pilot scheme.

So far, over 2,000 of the original Ambassadors have shown interest in once again donning purple and the idea is that many more people will step up to volunteer, though the official London Ambassador website still says that applications are closed.