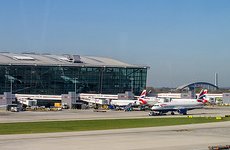 Boris Johnson’s plans to build a huge new airport for London in the Thames estuary – that he wants to call Margaret Thatcher airport – took a blow today (10.05.13), when an influential committee of MPs slammed the scheme.

“Research we commissioned made plain that building an entirely new hub airport east of London could not be done without huge public investment in new ground transport infrastructure,” said Lousie Ellman, chair of the cross-party Transport Select Committee.

“Evidence to our inquiry also showed a substantial potential impact on wildlife habitat in the Thames Estuary.

“The viability of an estuary hub airport would also require the closure of Heathrow, a course of action that would have unacceptable consequences for individuals, businesses in the vicinity of the existing airport and the local economy.

“Expansion of the county’s only hub airport is by far the best option.”

The London Mayor argued this morning that whatever the cost of Margaret Thatcher airport, they were dwarfed by the “unquantifiable” funds needed to add runways to Heathrow, the option favoured in the committee’s report.

“The crucial thing is that the third (Heathrow) runway, even if it were to be built by 2028, would be immediately obsolete, because there would be overwhelming demand, as Louise and the committee in this report rightly prefigure.

“There would be overwhelming demand for a fourth runway. The cost of that whole project is completely unquantifiable. Nobody knows how much it would cost. It would be cheaper to move London slightly to the east.”

“What the Transport Select Committee have revealed is that the Heathrow-ites are really intending to build a four-runway airport in the west of London, which in my view would be environmentally and politically undeliverable.

“By suggesting that Heathrow should double its runways from two to four, the committee is putting four fingers up to hundreds of thousands of Londoners.”