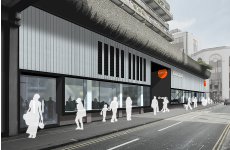 THE BARBICAN has announced a swanky new pair of cinema auditoria will open in The City based arts complex in September 2012.

The two new screens will join the existing Cinema One to “deliver a world-class programme of specialist, international cinema, live events and quality new releases across all three screens” says the Barbican’s Press Office.

The new, purpose built Barbican Cinemas, will boast exteriors designed by Allford Hall Monaghan Morris Architects who were responsible for the most recent redevelopment of the Barbican’s foyers. There will be “a stunning street-level entrance” and in-house facilities to include a restaurant, a café-bar and the two 156 seat auditoria.

“Barbican Cinemas are uniquely placed offering world class cinema within an international arts centre as well as a local cinema for the City.” said Sir Nicholas Kenyon, the Managing Director of the Barbican.

The existing Barbican Centre building has had a somewhat love-hate reputation among the arts fraternity. Once voted “London’s ugliest building”*, the cultural centre is constructed throughout with “bush-hammered aggregate concrete” imbuing it with a modernist masterpiece or brutalist monster character – depending on which side of the architectural fence you sit.

One of the main gripes from visitors, particularly first-timers, is the confusion faced when attempting to navigate the Grade Two Listed arts complex’s many corridors, ramps and levels. Thankfully the magical mystery tour can be dispensed with for these two new cinemas as they’ll have direct access via that “stunning street-level entrance” to Beech Street.

The two new screens will be the first venue additions since the Barbican opened its doors in 1982.