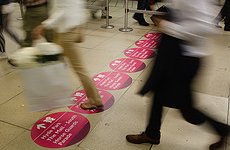 CENTRAL LONDON had the most visitors its ever had last week, despite fears the Olympics was putting punters off coming into town.

Figures released today by Transport for London show that 4.4 million passengers used London Underground on Friday 3 August, breaking a record set the day before when 4.3 million took to the Tube.

“We’re carrying these record numbers and keeping London moving and open for business because people are following our advice and planning their travel.

“We’re seeing people avoiding the peak hours and travelling at less busy times. I would like to thank our passengers for taking our advice helping the transport network to support a great London 2012 Games.”

Other forms of transport also joined the stat attack, with the DLR shifting over 500,000 people on Friday, about 70% more than usual and London Overground increasing its normal numbers by 27%.

“This is testimony to years of meticulous planning and billions of pounds in investment which combined has ensured that athletes, spectators, officials and media are being ferried smoothly to their events,” said London Mayor Boris Johnson.

David Beckham Sets Out for Athens to Bring Back the Olympic...