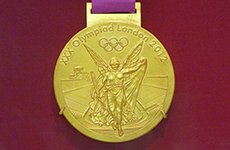 TEAM GB earned its first gold medal of the London Olympics this morning when the women’s pair rowed to victory at Eton Dorney.

Helen Glover and Heather Stanning dominated the race from the start, leaving the other finalists trailing in their wake over the 2012 Games rowing course.

Huge crowds, including Princes William and Harry, cheered home the pair as Britain put length after length between their boat and closest rivals New Zealand.

The stunning win followed half a week of disappointment for Team GB, as swimmers, cyclists and eventers came short of the big target.

Glover and Stanning have only been rowing together for three years, but now become the first British women ever to take a gold medal in Olympic rowing events.