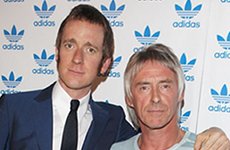 Strictly Come Dancing, I’m A Celebrity … Get Me Out Of Here! and Dancing On Ice are locked in a war to cast stars including cyclists Bradley Wiggins and Elizabeth Armitstead, sailing star Ben Ainslie, gymnast Beth Tweddle and swimmer Rebecca Adlington, who all wowed at the London Olympic Games.

A BBC source told The Sun: “Our priority is to secure as many London 2012 medal winners for this series of Strictly as possible. We want to get some big sporting names on board.”

An ITV insider added: “It’s war between the rival shows to get the biggest Olympic names signed up and smash their rivals out of the water.

“The nation has fallen in love with the Games and the most popular athletes have shot to the top of the celeb target lists.”

Meanwhile, new judge and professional ballerina Darcey Bussell is doing a crash course in ballroom dancing so she can impress fans when she joins the panel for new series.

A source said: “Darcey is a high profile signing for the BBC. They don’t want her getting tripped up by not knowing what she’s talking about.”