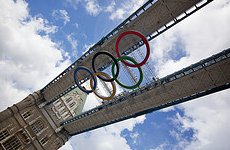 LONDON OLYMPICS tickets are more than three-quarters sold out with exactly one month to go until the opening ceremony, 2012 Games organisers have revealed.

To mark the one-month-to-go date, Culture Minister Jeremy Hunt and other Olympic officials were at a ceremony today to fix giant Olympic rings onto Tower Bridge.

Many of those tickets still to be taken up are for the Olympic football, especially in the women’s football section, but there are even some left for the men’s final – held at Wembley – of what is the second most important global football tournament after the World Cup.

Locog said that, apart from the football event, 90% of tickets have been sold, taking the London Games close to its £600 million revenue target, though that’s less than a tenth of the cost of the games.

The rest of the £8.4 billion cost of the Olympics is made up from sponsorship, central government money and the £1 billion extra in tax Londoners will have to pay.