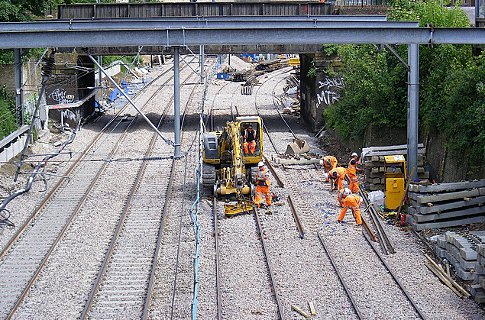 LONDON now has on orbital rail route, “the M25 of rail” in the words of Boris Johnson, after the opening today of the last link in the chain between Clapham Junction and Surrey Quays.

“The Mayor called it the M25 of rail, but we think we are better than that because we keep moving,” said Mike Stubb, director of London Overground.

Johnson was there for the Orbital’s official launch and stressed the importance of the new line for east London.

“This fantastic new orbital railway will provide Londoners with the ability to zip around the edge of the city quickly and easily, without the need to travel in and out of the centre,” said the Mayor.

“The extension will also help serve those rapidly regenerating parts of East London where the job market is expanding and will support further growth.”

But many south Londoners feel they are losing out as the old South London Line was removed to make way for the Orbital, leaving commuters south of the river facing longer journey times into work in central London.

“My current journey of a quick 15 minute ride on the train will more than double,” Peckham Rye to Victoria commuter Jane Smart told the BBC.

There’s a from-the-driver’s-cab video of the Orbital line here.

Londoners Take More Pride in London than in England or Britain,...