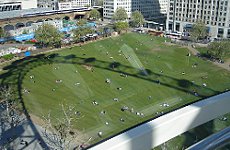 THE LONDON EYE is ten years old today and has done enough in its short history to rank above the Eiffel Tower and the Empire State building as a world status symbol, at least according to the big wheel’s boss.

“The Eiffel Tower to me is a little bit like the Empire State Building,” said Eye managing director David Sharpe.

Unsurprisingly, this is not an argument that impresses Eiffel Tower chief Myriam Daudet, who pointed to the culinary advantages of the Paris icon.

“You can stay for only half-an-hour on the London Eye but on the Eiffel Tower you can have dinner and stay much longer,” Daudet told BBC News.

More than 200 million people have been up the Eiffel Tower since it opened in 1889, while 36 million have gone for a spin around the Eye in the last decade and the choice, if it has to be made, boils down to one between height and movement.

At 324m, the Eiffel Tower stands nearly three times as tall as the 135m south bank wheel, but lacks the latter’s graceful, airy progress: they don’t call a trip on the Eye a “flight” for nothing.

Still, when it comes to the birthday celebrations, it is French champagne that is being handed out to visitors this evening.