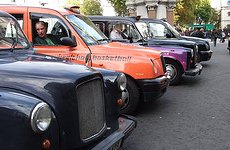 LONDON taxi drivers have accused Olympics organisers of airbrushing them out of the 2012 Games, a particular bugbear being Get Ahead of the Games, Transport for London’s guide to travel during the biggest sporting event ever to hit town.

Get Ahead of the Games’ one page devoted to taxis makes it clear that cabbies “are not permitted to use Games Lanes during their operational hours”.

“Why is it in all the plans and websites for the games that the iconic London Taxi, used to promote the London Olympic bid, has been excluded from transporting able-bodied and disabled passengers around London including journeys to and from the Olympic site?” asked Bob Crow, leader of the RMT transport union, which covers taxis.

“It is extraordinary that there has been such a chronic lack of Taxi involvement in the Olympic transport planning process, right through from the banning of these accessible and safe vehicles from the Olympic Route Network, through to the strategy for assisting those with disabilities.”

Last month Ruth Bashall, TFL’s own former disability advisor, blamed “lack of money” for the way disabled access to the Olympics “slipped down the list of priorities”.

In response, the Olympic Delivery Authority said: “Our accessible transport strategy has been shared with numerous transport experts and disability user groups to ensure it is fit for purpose.”

Tube drivers to strike in April and May over ‘disgusting’ working...