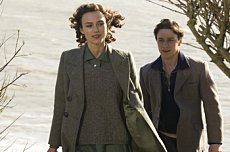 Garlanded in sumptuous fashion at the Golden Globes and nominated for a million Baftas and Oscars, the film starring Kiera Knightley now looks on line to rack up another sackful of prizes at the Sony Ericsson Empire Film Awards after being nominated for six gongs.

Harry Potter and the Order of the Phoenix, last year’s top box office performer, was also handed six nods for the ceremony at the Grosvenor House Hotel on 9 March, while two films – The Bourne Ultimatum and Hot Fuzz – are up for four awards.

Knightley has some stiff competition in what must one of the strongest fields for Best Actress of recent times, with Angelina Jolie (A Mighty Heart) and Cate Blanchett (Elizabeth) joined by Emma Watson (Order of the Phoenix) and Katharine Heigl (Knocked Up).

“That sophisticated films such as Atonement and Zodiac can rub up against blockbusters like 300 and Transformers proves that cinema audiences are a terrific judge of movies,” said Mark Dinning, editor of Empire.

Unlike other awards chosen by a panel of film experts, the Empire gongs are voted for by its readers.

Beckhams, Harry, Gordon Up for Sale