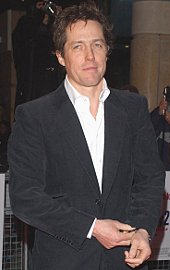 HUGH GRANT wants the next Bridget Jones’ Diary movie to be ”significantly reinvented” to reflect the actors’ ages, before he agrees to take part.

“I don’t think you could pretend that it’s a year after the end of the last one [2004’s Bridget Jones’ Diary: The Edge of Reason] because we look f***ing ancient now, all three of us,” Grant told Total Film magazine.

“It does have to be significantly reinvented.”

While Grant himself and co-star Colin Firth are both 51 – in fact their birthdays are only one day apart – the film series’ lead actor, Renee Zellwegger, is only 42 and is entitled to feel a bit miffed at the “f***ing ancient” slur.

Whether or not it’s the dinosaur-factor that’s the sticking point, Grant says he, Firth and Zellweger have not yet agreed to appear in another episode of the London-based rom-com.

He said: ”I did like playing Daniel Cleaver, but there is no definite part three. None of the three of us have signed up yet.

”There’s been a number of drafts that have had great things in them but haven’t quite hit the bullseye.

”But they’re working on it again now with yet another writer, as soon as they get to a good point we will do it, I’m sure.”