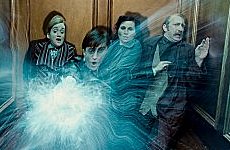 HARRY POTTER is to go centre stage in a new attraction planned for near London in time for the 2012 Olympics, Warner Bros. has confirmed.

Millions of pounds are to be ploughed into The Making of Harry Potter development, located at the Leavesden, Herts, studios at which the films were made.

There has been talk of the Potter attraction at Leavesden for a while, but this is the first time Warner Bros., the makers of the Potter series of films, has fleshed out any of the details.

Visitors are in for a three-hour tour featuring the costumes and sets from the Harry Potter movies, plus a behind the scenes look at the films’ animatronics and special effects.

Among the highlights promised are the Hogwarts Great Hall and Professor Dumbeldore’s study, with more sets to be revealed in the run-up to the opening in spring next year.

On the downside, it doesn’t look like Warner Bros. are to take the theme park approach to the Leavesden venture.

For those kinds of thrills and spills, you’ll still need to go to The Wizarding World of Harry Potter in Orlando, or wait until 2014 when a similar park is due to open in South Korea.

Harry Potter and the Deathly Hallows: Part 1 is still playing in some cinemas. Part 2 opens on 15 July.

Zara Phillips is pregnant – royal baby due in early 2014

Ghosts of London Past Haunt the iPhone