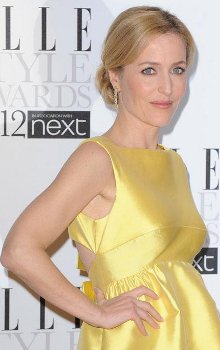 GILLIAN ANDERSON has been confirmed as the deathly Miss Havisham in the BBC’s new version of Great Expectations, which arrives on TV screens this Christmas.

It’s not the first time the X Files star has tackled a haunted character in a Charles Dickens’ novel for the BBC: in 2005 Anderson played Lady Dedlock in Bleak House to all-round praise.

The new three-episode TV version of Great Expectations is part of the Beeb’s 200th birthday celebrations for Dickens and features several big names as well as the former Agent Scully.

Starring alongside Anderson are: Ray Winstone as Magwitch; David Suchet as Mr. Jaggers; Oscar Kennedy and Douglas Booth as Pip, young and old, and Izzy Meikle-Small and Vanessa Kirby as Estella

“Great Expectations is my favourite novel, and I’m thrilled to be playing Magwitch,” said Winstone.

“I’ve wanted to play him for ages.”

One of the best London novels ever written, Great Expectations follows the roller-coaster fortunes in love and money of Philip Pirrip aka Pip. It is often considered to be Dickens’ masterpiece and has been filmed dozens of times for cinema and TV.

The latest film version, starring Helena Bonham-Carter, Ralph Fiennes, Robbie Coltrane and Holliday Grainger, is due out next year.