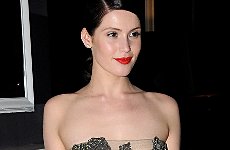 GEMMA ARTERTON wowed the cameras and passing shoppers at the world premiere of Prince of Persia: The Sands of Time held in the Westfield mall yesterday.

In the film based on the big-selling video game of the same name, Arterton plays Princess Tamina and for this red carpet event she sported a low-cut gown, designed by Valentino, straight out of a fairytale.

Not that action-girl Tamina is your regulation preening princess.

“It’s nice to see a Disney princess that’s not a damsel in distress,” said Arterton, born and brought up in Gravesend.

“She’s such a good role model for little girls who watch this.”

Also at Westfield were co-stars Jake Gyllenhaal, who takes the title role and Sir Ben Kingsley, who is the film’s baddie.

Tamina and her Prince battle against dark forces to safeguard an ancient dagger capable of releasing the Sands of Time – a gift from the gods that can reverse time and allow its possessor to rule the world.

Prince of Persia: The Sands of Time opens in London on 21 May. See the trailer here.