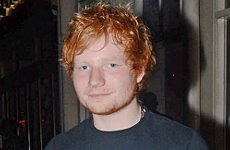 The Lego House hitmaker received four nods in recognition of his work over the past year, including Best British Male Solo Act, Best Breakthrough Act and British Album of the Year for +, while his debut track A Team was nominated in the Best British Single category.

Following closely behind was Adele and Jessie J, who were each nominated in three categories, including Best British Female Solo Artist while their respective tracks Price Tag and Someone Like You will compete in the Best British Single listings.

Meanwhile, Adele’s 21 was nominated for British Album of the Year, while Jessie J will battle it out in the hope of being crowned British Breakthrough Act.

Elsewhere, Florence and the Machine received two nominations for Best British Female Solo Artist and a nod in the Album of the Year category for Ceremonials, the follow up to debut album Lungs.

Ed Sheeran, Rihanna, Florence and the Machine and Noel Gallagher will all perform at this year’s BRITs on 21 February, while Adele is expected to make her first appearance since suffering a vocal cord haemorrhage in October.

Mastercard British album of the year

Adele – Someone Like You
Ed Sheeran – The A Team
Example – Changed The Way You Kiss me
Jessie J featuring B.O.B – Price Tag
JLS featuring Dev – She Makes Me Wanna
Military Wives and Gareth Malone – Wherever You Are
Olly Murs and Rizzle Kicks – Heart Skips A Beat
One Direction – What Makes You Beautiful
Pixie Lott – All About Tonight
The Wanted – Glad You Came