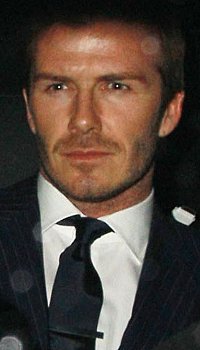 The 37-year-old star – who attended the nuptials of Prince William and Duchess Catherine in April 2011 – said: “Buckingham Palace is in the heart of London and it’s been the scene of so many great moments in British history – none of us will ever forget the amazing wedding last year.

“Best of all, it’s open for visitors during the summer so you can have a look around the state apartments.”

Beckham – who grew up in Essex – recommends indulging in some traditional London food, such as a meat pie and mash potato meal, as “an insider’s tip for a real east London food experience”.

In a smartphone app guide for national tourism agency VisitBritain, he advises eating the traditional delicacy at Tony Lane’s pie and mash shop in Waltham Abbey, Essex, which he singles out as his “favourite” and which he always visits when he returns to England from his Los Angeles home.

Beckham also believes visitors should try out one of Britain’s many theme parks, particularly if tourists are coming to the UK with their children.

He said: “Kids can’t get enough of theme parks as I know being a father of four. You’re never far away from one in Britain.”

He helpfully points out Thorpe Park is “just outside London” and recommends visitors “get out in the fresh air at one of London’s Royal Parks”.

1. Take a tour of Buckingham Palace .
2. Experience some real east London food at Tony Lane’s Pie & Mash shop.
3. Go on a Wembley stadium tour.
4. Grab some fresh air at one of the Royal Parks, such as Hyde Park or Richmond Park.
5. Play a round of golf at St Andrews (not strictly speaking in London)
6. Go shopping in Camden, Portobello or Spitalfields markets.
7. Take the kids to Thorpe Park or on the Harry Potter studio tour.
8. Don’t miss London’s theatre scene and plays like War Horse or Jersey Boys.
9. Eat at Ceconnis or NOPI in London.
10. Go for a walk in the countryside and stop off at a pub along the way.

Charing Cross Station Gets its Cross Back