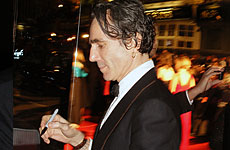 Daniel Day-Lewis was ‘knighted’ by Dame Helen Mirren as he was named Best Actor at last night’s Oscars (24.02.08).

The 50-year-old star was recognised for his role in There Will Be Blood and when he collected the award he knelt before Mirren, who was named last year’s Best Actress for her portrayal of Britain’s Queen Elizabeth in The Queen.

She then used the golden statue to tap Day-Lewis on each shoulder, mimicking how the monarch uses a sword to award a knighthood.

The British actor joked: “This is the closest I’ll ever come to getting a knighthood, so thank you.”

He then added: “I hope that all those to whom I owe and feel the deepest gratitude will forgive me if I say just simply, thank you all.”

Day-Lewis – who has previously won the Best Actor Oscar for his role in My Left Foot: The Story of Christy Brown – beat off competition from George Clooney, Johnny Depp, Viggo Mortensen and Tommy Lee Jones.

She joked: “Clooney, you know, the seriousness and the dedication to your art, seeing you climb into that rubber batsuit from Batman and Robin, the one with the nipples, every morning under your costume, on the set, off the set, hanging upside-down at lunch, you rock, man.”

The biggest winner of the night was No Country For Old Men, which was named Best Film and Best Adapted Screenplay, while brothers Joel and Ethan Coen were jointly awarded Best Director. Javier Bardem also won Best Supporting Actor for his role as a hitman in the film.

Pig Farmers Stand By Their Ham