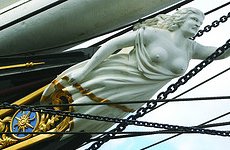 THE QUEEN headed over to Greenwich today to unveil the refurbished sailing ship, the Cutty Sark, the world’s last surviving tea clipper, which was almost lost in a fire in 2007.

“But luckily at the time the important historic parts of the ship had already been taken off and were in storage.”

It was 55 years ago that the same royal personage opened the original riverside Cutty Sark exhibition, which went on to become a fixture on the London tourist trail.

This time around and £50 million later, restorers have raised the beautiful old clipper three metres (about ten feet) off the ground so that visitors can walk underneath to appreciate the streamlined hull that made the Cutty Sark one of the speediest ships of the mid-19th century.

“This ship is a symbol of British maritime power for many reasons,” said Nash.

“One is the aspect of trade, the other thing is the technology. At her time this was the most advanced technology that existed.”

RideLondon to finish at Admiralty Arch after Olympic sweep through Surrey

Batman Bale Arrested by the Met