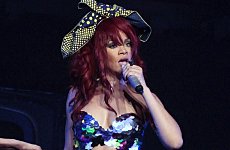 COLDPLAY and Rihanna will perform their duet Princess of China together at the O2 for next year’s BRIT Awards.

The Paradise group will team with the Bajan beauty to perform the track – from their recent Mylo Xyloto album – live together for the first time at the annual British awards show.

A source close to the event told The Sun: “Coldplay are really looking forward to performing Princess of China with Rihanna already.

“Brits bosses set their sights on getting them on stage together early doors. They are two of the biggest acts around right now.”

Coldplay singer Chris Martin has previously said how he had to “pluck up the courage” to ask the Umbrella singer to star on the song with them.

He said: “We did a show in Las Vegas and I met her and said, ‘Do you think there’s any chance?’ I was very Hugh Grant-like and spluttering about it.

“It took a while to pluck up the courage to ask her. She has such an amazing voice and it’s so different to mine.”

Other acts in the frame to appear at the BRITs ceremony 2012 include Kasabian, Noel Gallagher’s High Flying Birds and Adele, who could make her comeback at the show after having to cancel all performances and undergo an operation on her vocal cords in November.

The Someone Like You singer is also hotly tipped to sweep the board and collect a number of trophies for her second album, 21.

A spokesperson for the BRITs said: “We are still confirming the line-up, which will be announced with the nominations in January.”

David Beckham Sets Out for Athens to Bring Back the Olympic...