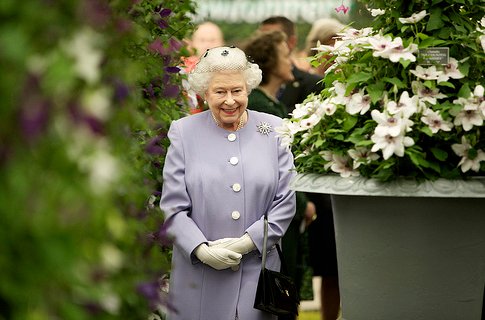 The Chelsea Flower Show opens tomorrow, celebrating its 100th birthday in the process, and today there’s the annual pre-show visit by the Queen, who will be confronted by a gang of celebrity garden gnomes.

Held as usual in the grounds of the Royal Hospital in Chelsea and run by the Royal Horticultural Society, the show is the premier gardening event in the calendar and is this year aiming to use its prestige to encourage careers in horticulture.

“Nearly 50% of under-25s think horticulture is an unskilled career,” said TV gardener Alan Titchmarsh, who is fronting the RHS campaign.

“We must act now to make horticulture appeal to young people. We must engage with them in an interesting way to discover the immense job satisfaction and wealth of opportunities horticulture can offer.”

That’s where the gnomes come in. Painted by celebrities including Lily Allen, Sir Elton John, and Dame Helen Mirren, the little figures are to be sold on ebay to raise funds for the horticulture career effort.

As well as designer gardens and celebrity gnomes, the display created by her grandson Harry is likely to catch the Queen’s attention.

Officially, the show is sold out, but there are some tickets around and TV viewers (BBC2 7.30pm, tonight) can catch a glimpse if not a scent of the incredible variety of plants on display.

The RHS Chelsea Flower Show runs from 21-15 May.

Carry On Up the Winehouse!