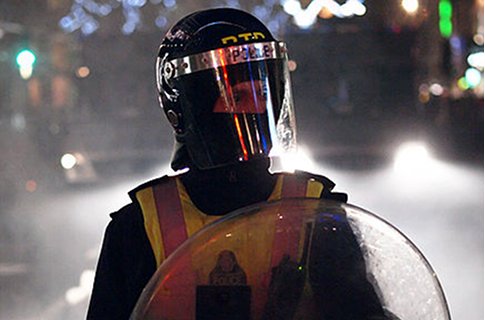 Carnival Against Capitalism campaigners are to go ahead with today’s protest against the G8 summit, despite police blocking off the group’s Soho headquarters.

“Don’t let them intimidate us,” says a message on the Stop G8 website.

“The carnival will of course go ahead as planned.”

At least a hundred police officers dressed in full riot gear are on patrol in the West End ahead of the carnival and this morning cordoned off Beak Street, where organisers of the protest set up their HQ in a former police station.

Campaigners had been using the empty Beak Street property as a base to make banners for the day’s marches, but their preparations were interrupted after police gained entry.

“There’s a warrant being executed there,” said a spokesperson for the Met.

“Our protest liaison teams are actively working to engage with those wishing to protest so that we can facilitate peaceful protest.”

Carry On Kettling and Keep Up the Beatings, Court Tells the...