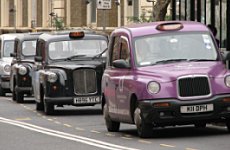 BLACK CABS are set to clog up central London around Trafalgar Square today, as thousands of their drivers protest against minicab drivers encroaching on their turf.

The main issue is a new minicab office near Leicester Square, which is seen as a sneaky way to get around the legal ban on minicabs picking up passer-by fares, traditionally the preserve of black cabs.

On weekends at Leicester Square, punters can queue for minicabs waiting in a bus bay, which looks to black cabbies suspiciously like an everyday cab-rank.

“The new minicab office was the straw that broke the camel’s back,” said Pete McNamara, editor of Taxi, a publication for cabbies, describing the office as a “virtual cab rank”.

Traditionally, black cab drivers have exclusive use of official turn-up-and-go cab ranks while minicabs must be pre-ordered.

To get this privilege drivers of the famous black cabs have to go through a long memory-training programme known as The Knowledge, after which they know routes through town by heart.

“The scheme, which is still in a trial period, was never intended to replace black cabs,” said Martin Low, of Westminster council.

“We would welcome ideas from black cab drivers on how to increase their availability in the West End, particularly in the early hours of the morning when the clubs close.