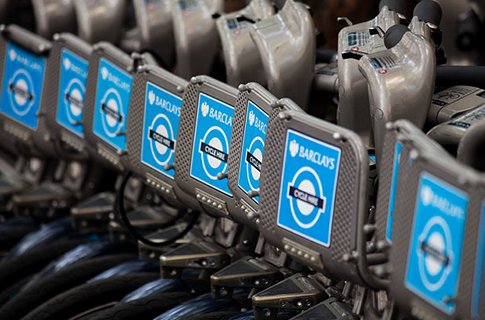 Boris-bike workers are “rock solid” in support of today’s strike, held by the RMT union to fight for higher pay and against management “bullying and harassment”.

The 48-hour stoppage started last night and was backed by a 100% vote among RMT members of the bike hire scheme’s staff. 90% of bike hire workers are represented by the RMT.

The timing of the dispute is handy for the strikers as it comes on the day Prime Minister David Cameron set out plans for a multi-million pound investment in cycling.

“With David Cameron announcing investment in cycling today, he could start by telling his old school chum Boris Johnson to end the exploitation of his bike scheme workforce,” said RMT leader Bob Crow.

“This group of workers are rock solid this morning in their fight for workplace justice and its about time Boris Johnson got involved in resolving this dispute rather than treating his bikes as a vanity project”.

The RMT is seeking a higher annual pay rise than the below-inflation 2% imposed by Serco, the company that runs the bike hire scheme, and also is concerned at changes in shift patterns and what the union describes as “continuous bullying and harassment”.

“A pay rise of 2% is above the national average,” said Andrew Hill, boss of the cycle hire department at Serco.

“This strike action is wholly unnecessary. However, we will make every effort to ensure that we minimise its impact for the thousands of Londoners who rely on the scheme to get around every day.”