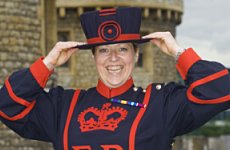 TWO Beefeaters have been suspended from their duties at the Tower of London over alleged bullying of their only woman comrade, Moira Cameron.

One other Yeoman Warder (the official name for the famous Beefeaters) is also being probed and it is thought some of the other 31 guardians of the Tower may come under scrutiny in the near future.

“Three Yeoman Warders are under investigation in response to allegations of harassment,” said a spokesperson for the Tower of London.

“Two have been suspended. We take such allegations very seriously.”

One of the complaints being investigated is that nasty comments were left on Cameron’s Wikipedia entry. It is believed police have already issued a caution to the guilty party of that incident.

There are also reports that Cameron had dodgy notes left in her locker and had her uniform defaced.

The first woman to claim a place as a Beefeater, Cameron has only been in the job for two and half years and has had to deal with sexism from the off.

“I had one chap at the gate one day who said he was completely and utterly against me doing the job.”

The Tower of London authorities say they will have completed their investigation “within two to three weeks”.

Beefeaters/Yeoman Warders have guarded the Tower since the time of Henry VII, though the job has become more ceremonial over the years and nowadays extends to leading tourist tours of the castle.

London Rated Most Expensive Car-Parking City in the World