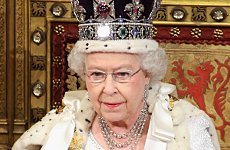 HM QUEEN ELIZABETH’s carefully choreographed appearance at the opening ceremony for the London Olympics has boosted her popularity with the British public*.

The monarch starred alongside actor Daniel Craig – in character as James Bond – for the event, where she appeared to parachute into the Olympic Stadium.

This was against five percent of people who said their opinion of the royals had fallen.

Although the monarch’s stunt was largely seen as positive, some weren’t impressed by it, with Richard Ingrams, editor of The Oldie and former editor of Private Eye saying: “I think the queen made a great mistake when she agreed to do that stunt with Daniel Craig.

“What can she and her advisers have been thinking of? It was very undignified for an 86-year-old woman.

“I noticed that when she appeared in the stadium she didn’t look amused. Quite right, too. She’d been taken for a ride.”

Alongside the queen’s appearance, her granddaughter, Zara Phillips, won a silver medal in the eventing while the Duke and Duchess of Cambridge and Prince Harry were all regular spectators supporting Team GB.

Yesterday (15.08.12), her husband Prince Philip was taken to hospital as a “precautionary measure” and he is expected to stay there for the next few days.

The Duke of Edinburgh, 91, was driven by ambulance to Aberdeen Royal Infirmary while staying at nearby Balmoral with wife Queen Elizabeth yesterday (15.08.12) after suffering from a recurrence of a bladder infection.

Philip – who originally suffered the infection shortly before the Diamond Jubilee concert on 4 June – is likely to remain in the NHS hospital for the next few days.

A Buckingham Palace spokesperson said: “The Duke of Edinburgh has had a recurrence of the bladder infection that he had earlier in the summer and has been admitted to hospital for investigation and treatment. The prince is likely to remain there for the next few days.”

*The poll was undertaken by Ipsos Mori and questioned 1,007 people across the country on August 11-13, the last weekend of the Olympics.

Malcolm McLaren gets send off from Camden crowd