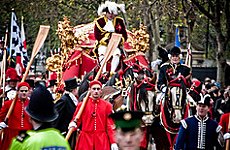 NEARLY 800 years after the first running of the event, tomorrow (10.11.12) sees the annual Lord Mayor’s Show parade through the streets of London.

As well as the usual floats and pageantry, this year’s event features an original American stagecoach, a Japanese Taiko drum band, a steamroller, a boat, and a Sherman tank.

The Lord Mayor’s Show is London’s biggest non-Royal bit of pageantry and regularly attracts hundreds of thousands of onlookers. Usually, there’s a fireworks display, but that’s been pulled this year.

“After the wonderful Diamond Jubilee and Olympic celebrations this summer, it was felt that there’s only so many fireworks we should be sending up in one year,” read a statement from the organisers.

On the plus side, for the first time in 156, there will be an official Mayoral flotilla on the river.

Jail for Parents of Teenage Drunks