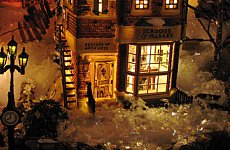 OXFORD and Regent Street lights during the festive period are to be given A Christmas Carol theme this year.

Charles Dickens’ famous tale of Scrooge and his about-turn on the meaning of Christmas is also the subject of a new movie from Disney, which comes out in London the same day, 3 November, the lights are to be switched on.

“We want to bring to life the magic of Dickens’ enduring, much loved classic,” said London Mayor Boris Johnson.

“It’s going to be one of the biggest festive celebrations the capital has ever seen. Hosting the world premiere of Disney’s A Christmas Carol will kick things off in magnificent style.”

Among the events planned to back up the film and Christmas lights are street-level music performances and a stab at the world record for number of carol singers at one venue. Good tidings they bring.