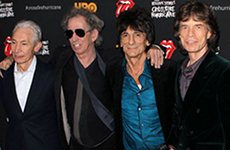 THE ROLLING STONES are to perform with former members Bill Wyman and Mick Taylor at their 50 and Counting show at the O2 on Sunday (25.11.12).

The current band – Sir Mick Jagger, Keith Richards, Charlie Watts and Ronnie Wood – have promised a show packed with hits from their 50 year career, as well as “a few surprises.”

Rumours they would perform with Wyman have been circulating since Wood said he had been rehearsing with them earlier this year.

Wood said in July: “I saw him last week and he was in top form, rocking. We also did a rehearsal with him a few weeks ago. It’s like he’d never been away.”

The band will take to the stage at 8pm on Sunday, and will not have any support act. They will play a second show at The O2 next Thursday (29.11.12), before heading to the US, playing at the Barclay Center, New York City, on Saturday 8 December and the Prudential Center, New Jersey on 13 and 15 December.

The group have also released a video to new track Doom and Gloom, taken from their recent compilation album GRRR!, starring Swedish actress The Girl With the Dragon Tattoo star Noomi Rapace. The clip was directed by Jonas Akerlund, who has previously made videos for Lady Gaga, Madonna and Britney Spears.