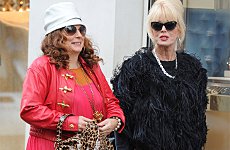 After the long-awaited return of the BBC One comedy – in which she stars as flamboyant PR guru Eddy Monsoon – pulled in nine million viewers for its Christmas special, co-creator Jennifer has revealed she plans to jet off to the French Riviera to shoot a feature-length Ab Fab film.

She told New York magazine: “I’m definitely going to do it. I’m aiming to shoot this in a beautiful part of the Riviera. I fancy the South of France in the spring.”

Jennifer has previously admitted she only committed to making more episodes of the comedy because her co-star Joanna Lumley – who plays Patsy Stone – had already told an interviewer she would be.

She said: “It was mainly because Joanna announced it that we did it. She said, ‘Darling, I told them in New York that you’re going to do a few more.’ ”

Usain Bolt, fastest man on the planet, to return to London...